Sources of renewable energy in Australia 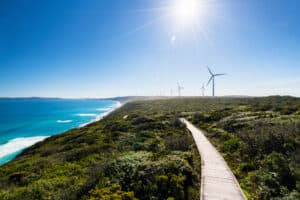 In Australia, wind energy is the largest source of renewable energy, producing enough electricity to meet 7.1 percent of the country's total demand. Wind power is also one of the cheapest sources of energy in the country, with utility-scale wind farms delivering approximately 16 GW of capacity in 2018. In the coming decade, utility-scale wind power is expected to reach costs of $50-65 per MWh, with new wind farms reaching this level by 2030.

The country's large renewable resource base is spread out across the country. Hydroelectricity resources are largely developed and wind energy is a rapidly growing industry. While Australia has a rich hydropower and wind resource base, its current utilisation is limited by higher transformation costs, immature technologies, and long distances from markets. In addition, Australia has significant geothermal resources, but these have not been quantified and are primarily considered “hot sedimentary aquifer”-type resources.

Solar and wind power are two different types of renewable energy. Solar panels can be used to pre-cool or pre-heat the house. Reverse-cycle air-conditioners can be programmed to switch on before the occupants return home. All of these sources require qualified professionals and installers. Clean energy council offers a directory of accredited designers and installers. They can design and install the system for you. You can also install your own solar panels and wind power.

Investment in renewable energy in Australia over the past five years 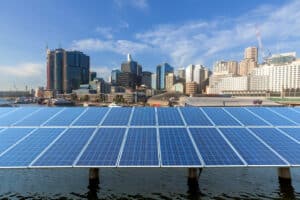 The rise in investment in renewable energy in Australia has been largely driven by government policy. While some companies invest in emerging technologies, the vast majority of investors are more hesitant to back projects involving unlisted companies. There are several risks associated with energy production, including increased risk factors, delayed grid connection, and the Morrison government's unwillingness to meet climate targets. Investors must also consider the impact of proposed reforms at the Energy Security Board, including the implementation of a capacity market that will support ageing coal power plants.

In the last decade, the Australian renewable industry has expanded dramatically. Wind and solar generation accounted for 16% and 27% of total electricity generation in Australia by 2020, respectively. Hydropower generation has remained consistent but is slowly fading as more renewable sources replace conventional sources. Moreover, large-scale solar generation is growing rapidly. Eventually, it will account for almost a quarter of the nation's electricity supply by 2020.

While direct investment in renewable projects is low-risk, it is also not without its risks. In Australia, large-scale solar projects are unlikely to go wrong, but retail investors have traditionally preferred to invest in corporate bonds. MidAmerican Renewable Energy Company, for example, recently issued $1 billion in bonds at a 5.375% interest rate. Despite this low interest rate, however, bond investing is still a risky business.

The future potential of renewable energy in Australia 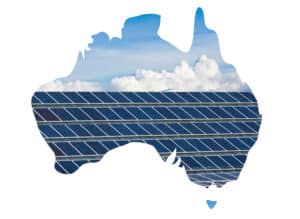 With government funds to offset the costs of installing new renewable energy sources, the cost of electricity will be less than $30 a megawatt hour by 2030. That price will undercut most existing gas stations and compete with gas for industrial heating. Renewable electricity production will also be easier to balance with existing technology. To reach that price, renewable electricity needs to be delivered into cities via a stronger high voltage transmission network. By 2030, most of Australia's energy demands will be met by renewable energy sources.

In the last year alone, Australia added over 2,200 megawatts of renewable energy capacity. By 2035, the country could add another 10,400 megawatts of renewable energy capacity. Of this, 7,200MW will be large-scale solar photovoltaics and 3,200MW from rooftop solar. Of this total, about half will be permanent jobs in operation and maintenance. It's an ambitious goal, but one that is achievable.

Despite the potential benefits of renewable energy in Australia, there are many challenges. In addition to the lack of storage capacity, solar and wind power generation have a limited supply of energy. Without proper storage, they may not be available at the time of electricity demand. In Australia, storage solutions have two common forms of energy storage: batteries and hydroelectricity. In the future, hydrogen storage technologies may also play an important role. As these technologies advance, we will continue to see significant investments in them.

Hydrogen is another promising renewable energy resource. Hydrogen is a versatile energy carrier, capable of reducing emissions from hard-to-abate industrial sectors. It can also be used as a co-fuel for coal power plants. However, hydrogen's cost is prohibitive. In order to lower its cost, the hydrogen industry must be supported by robust policy. If successful, Australia could be a hub for hydrogen production.

The government is taking a number of steps to help Australia achieve its target of becoming 100% renewable. The government is supporting high-voltage interconnectors, allowing the integration of 50-100 per cent renewable energy into the national grid. Additionally, government funds for large-scale storage projects will also help renewables reach their full potential and deliver deep emissions cuts. This is an extremely exciting time for the Australian renewable energy industry. 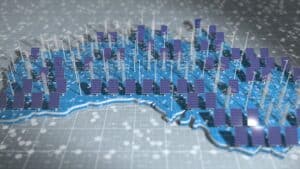 In addition to identifying legal issues related to renewable energy and geothermal resources, proponents of these projects also have to comply with a wide range of titling requirements and legislative requirements. These requirements can be complicated by varying state laws and can limit the scope of renewable energy projects. To ensure the success of your project, here are some of the legal issues you will need to consider. Listed below are some of the common legal challenges you may encounter.

Developing a renewable energy project in Australia involves many legal issues. These include obtaining permits, obtaining regulatory approval, identifying funding and negotiating with local governments. There are many obstacles to overcome, but a thorough understanding of the applicable laws will help you navigate these hurdles successfully. Investing in renewable energy is a sound investment for the future of Australia, but it requires careful planning and thorough analysis of all available options.

The regulatory framework for environmental protection in Australia varies between states, but most states have adopted a similar duties-based framework modelled on occupational health and safety legislation. Most states have also made renewable energy projects subject to a general environmental duty. This duty requires the person engaging in an activity to reduce the potential for environmental or human health impacts. In Australia, it is possible to acquire a license for renewable energy projects.

The Australian government has recently released recommendations for NEM reform. These recommendations outline a major reform agenda for the NEM over the period 2021-2025. While the final recommendations are still unknown, the major reforms recommended by the Australian Energy Security Board are likely to be similar to those that were released for consultation in April 2021. These include the development of a National Electricity Zone. Further, these reforms are intended to make renewable energy more competitive and reduce the cost of electricity.

The Australian government's policy on the green energy sector also outlines a range of key legal issues that can affect renewable energy projects. For example, a number of energy companies have opted for long-term power purchase agreements (PPAs) to obtain finance and revenue certainty. However, the PPAs can also be used to secure corporate contracts with electricity retailers. Typically, these contracts are made to reduce the costs of electricity and address price volatility and to meet environmental obligations. 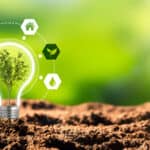 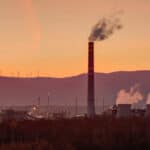